Technology Minerals Plc (LSE: TM1), the first listed UK company focused on creating a sustainable circular economy for battery metals, is pleased to announce the addition of seven new prospecting licences to its ground holding on its Leinster Lithium Property, Republic of Ireland.  This addition brings the Company’s licence position to 23 licences covering a total of 760km2 of highly prospective geology with verified occurrences of spodumene-bearing lithium pegmatites. Initial reconnaissance at two localities on the new licences have already yielded two clusters of spodumene pegmatite float material with grades of up to 1.73% Li2O.

·    The Company believes that the new licences lie on a parallel but less well-defined structural trend to the East Carlow Deformation Zone which itself has been shown to provide the locus for spodumene pegmatite emplacement.

·    The presence of structure is a key component to the anatectic genetic model for pegmatite development and emplacement in South East Ireland.

·    Follow up exploration will commence to further enhance understanding of the spatial distribution of the boulder trains discovered so far, as well as the rest of the licences.

The seven licences, which were awarded to the Company’s wholly owned subsidiary LRH Resources Limited (“LRH”) on 1 December 2022, are 100% owned. The other 16 licences which form the rest of the Company’s Leinster Property exploration block, are operated under an exclusive Option and Earn-in agreement with Global Battery Metals Ltd (“GBML”), (TSXV: GBML; OTCQB: REZZF; Frankfurt: REZ).

The seven new licences form a contiguous block with the Company’s previously issued PLA 1597 and extends the ground holding both to the NE and SW of the Knockeen and Carriglead spodumene-bearing boulder trains which were reported on that licence. Together this block of eight licences form the Company’s South Leinster Block (Figure 1 & 2).

Evidence for spodumene pegmatites relating to two historical boulder trains were reported in archive reports and maps at the Geological Survey of Ireland and date back to 1977. A brief reconnaissance visit to the two areas by the Company’s geologists on PLAs 3895 and 3896 have confirmed the presence of numerous boulders of spodumene pegmatite. Ten samples were collected for analysis during this initial reconnaissance visit.

The results of the sampling are presented below in Table 2 with the four samples on PLA 3895 returning assay values of between 1.54 – 1.79 % Li2O with four further samples on PL 3896 reporting between 0.58 – 1.63 % Li2O. Two further samples AES61135 and AES61136 comprising of altered lithologies associated with the pegmatites were also analysed (Table 2). The spatial distribution of the sampling across the two areas are presented in Figures 1-3 below. Ongoing geological mapping, and sampling by the Company will further define this zone and determine the full pegmatite prospectivity. 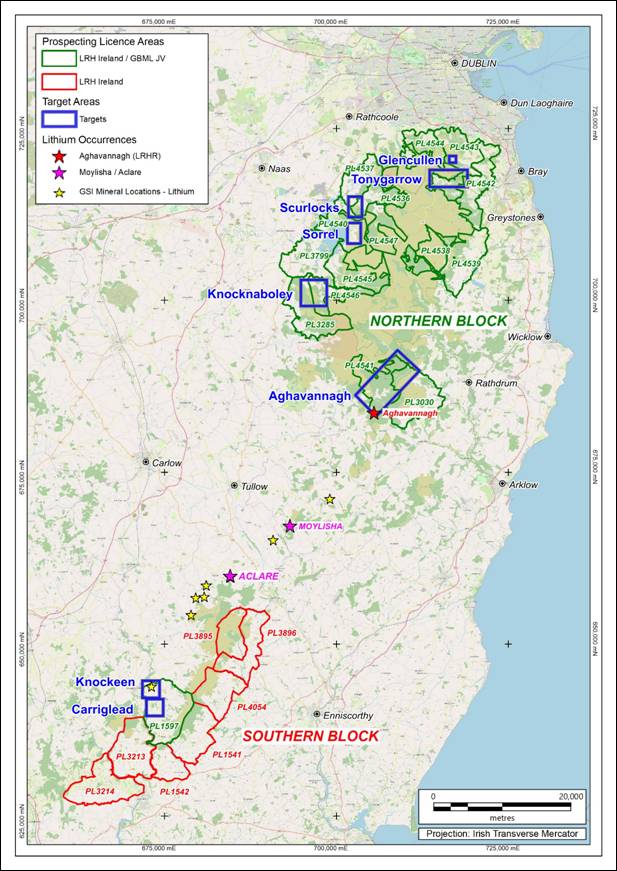 and the Southern Block (eight licences) 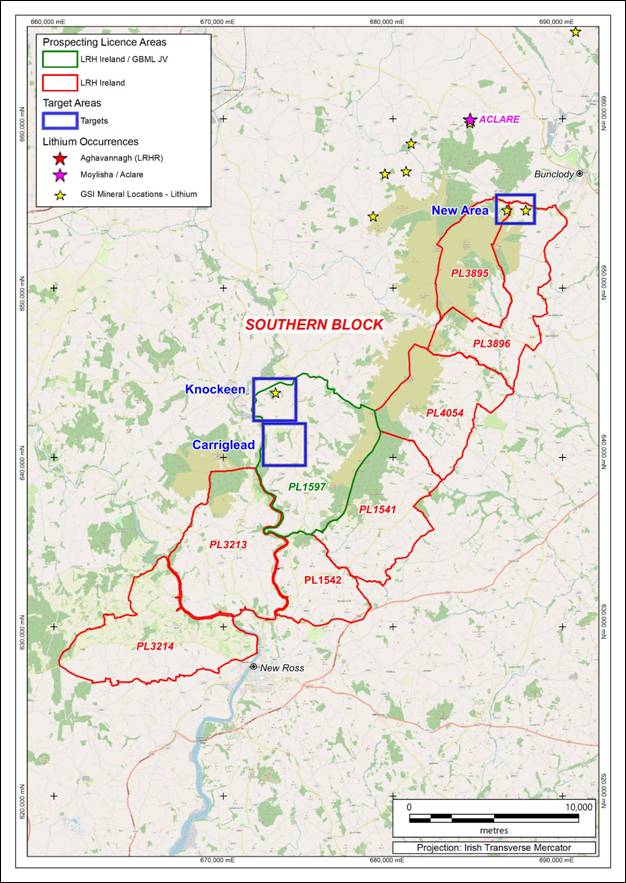 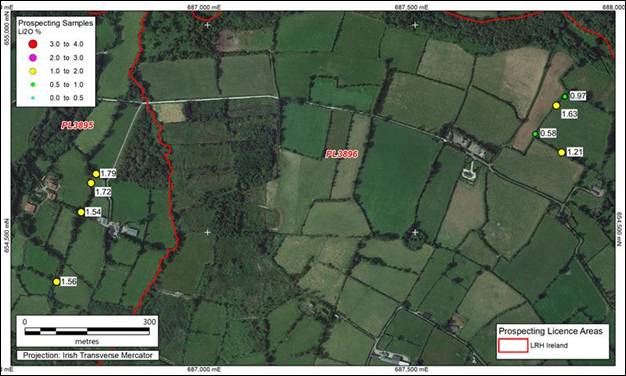 Alex Stanbury, CEO of Technology Minerals, said: “We are pleased to add seven new prospecting licences to our Leinster Project, increasing our strategic foothold at the Leinster lithium property in South East Ireland by over 40 percent to 760km2. We consider these to be exciting additions to our portfolio and look forward to commencing further exploration to enhance our understanding of the project’s potential. Given the supply squeeze taking place for lithium globally, finding new sources of primary supply will be critical to help power the move to a carbon neutral economy.”

All scientific and technical information in this announcement has been prepared under the supervision of EuroGeol Vaughan Williams M.Sc. P.Geo (a Principal of Aurum Exploration Services who currently provides exploration services to TM and to LRH), and a “qualified person” within the meaning of National Instrument 43-101. Vaughan Williams is also company secretary of LRH and a Director of the LRH Spanish subsidiary Asturmet Recursos S.L.

Technology Minerals is developing the UK’s first listed, sustainable circular economy for battery metals, using cutting-edge technology to recycle, recover, and re-use battery technologies for a renewable energy future. Technology Minerals is focused on extracting raw materials required for Li-ion batteries, whilst solving the ecological issue of spent Li-ion batteries, by recycling them for re-use by battery manufacturers. With the increasing global demand for battery metals to supply electrification, the group will explore, mine, and recycle metals from spent batteries. Further information on Technology Minerals is available at www.technologyminerals.co.uk

Table 4: Results from follow up prospecting at Knockeen (December 2022)

Table 5: Results from follow up prospecting at Carriglead (December 2022)