ECR Minerals plc (LON:ECR) the precious metals exploration and development company is pleased to confirm that exploration mapping undertaken by the Company at the Creswick Project has identified a large gold system in the Dimocks Main Shale gold targets. 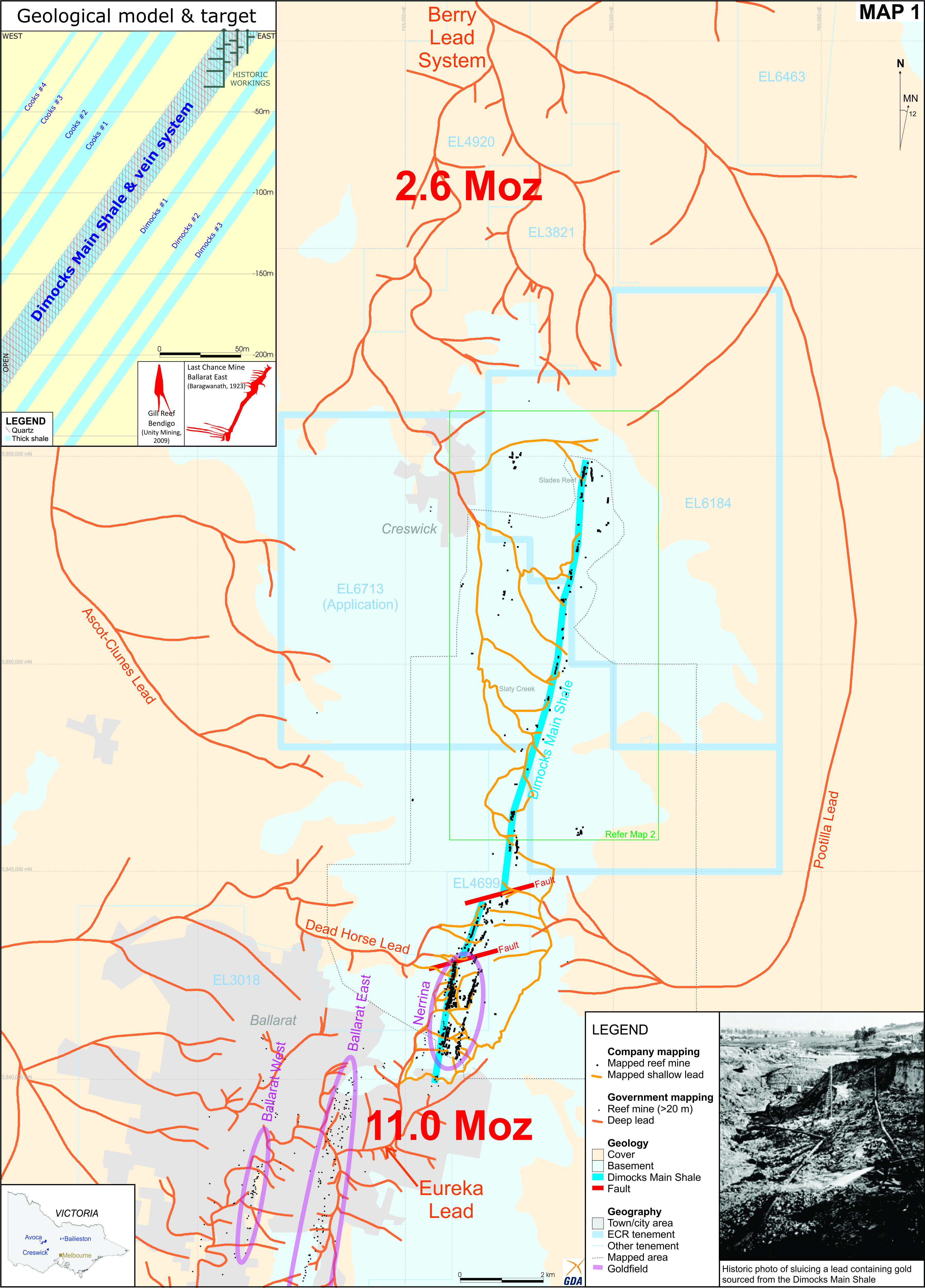 The DMS sits between two large gold producing areas where it is estimated historically, 15 million ounces of gold has been produced in Victoria, Australia. It is the proposition of the Company’s technical team that they have identified the hard rock source for a significant portion of the aforementioned 15 million ounces of gold production. Although further work is required to validate this proposition.

A visual representation of the DMS and the Company’s mapping, which demonstrates the potential link from the alluvial source with the DMS, is provided through following links to the ECR Minerals website:

The original acquisition of the Creswick project was announced by the Company on 20 April 2018 and readers may wish to review that announcement.

Craig Brown, Chief Executive Officer of ECR Minerals plc, commented: “We are excited by this discovery of a potentially large gold system at Creswick which has been identified by our technical team, led by Dr Rodney Boucher, and is the outcome of many years of detailed study. We are very grateful for the professionalism, experience and commitment that has been applied to reach this point.

The news announced today is in line with our primary objective to make a significant and economic gold deposit discovery. The confirmation of a system which potentially feeds into two established gold producing areas is very exciting for the team; and an area of targeted future exploration.

We will be providing further information in respect of this project, and specifically the drilling programme for the DMS which will be undertaken in due course when preparatory works have been undertaken.

The board’s confidence in the Victoria region and its potential to hold further large gold deposits has been growing with our recent work and today’s announcement provides a significant step up in our confidence level.

Further work is required to substantiate our findings and quantify the extent of gold mineralisation, but without doubt, the Creswick licences are now a key project for the Company.”

In the view of the Company’s technical team contemporary exploration has continually been drawn to the district due the proximity of the Ballarat and Creswick goldfields and in particular exploration programs within EL6184 have sought the source alluvial gold that was in the Berry Lead system.

It is also the view of the technical team that despite numerous companies having held tenements over the area those companies failed to recognise the significance of the Dimocks Mains Shale and its potential for significant gold mineralisation.

The Dimocks Main Shale provides an opportunity not previously recognised in Victoria. The DMS is 25m wide and hosts strata-bound auriferous quartz veins with potential for bulk mining (refer to Map 1).

The shale has been mapped and shown to run for over 7 km in EL’s 6184 and 6713 (refer to Map 1). The DMS continues 8 km to the south to form one third of the Ballarat goldfield at the locality of Nerrina or Little Bendigo.