What countries account for the most tungsten production? China took the top spot last year, and eight other countries also put out significant amounts.Tungsten, also known as wolfram, has many uses. It is commonly used to produce electrical wires, heating and electrical contacts. 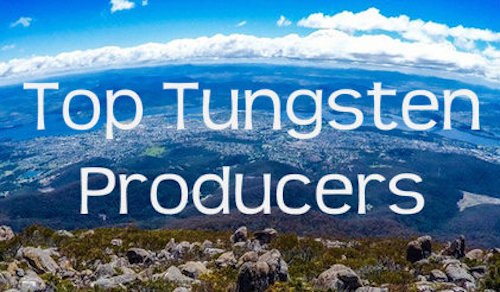 But it is also used in welding, heavy metal alloys, heat sinks, turbine blades and as a substitute for lead in bullets.

This increase came despite reduced output from Mongolia, Rwanda and Spain. A large boost in production came from the UK, where production increased around 50 percent.

The price of tungsten started to rise at the beginning of 2017, and has been booming since then. The bump in prices has been attributed to supply constraints, especially in China.

Tungsten’s importance in industrial applications, from smartphones to car batteries, means that demand won’t disappear anytime soon. With that in mind, it’s worth being aware of which countries produce the most tungsten.

Given its unique and valuable properties, the European Union ranked tungsten as one of Europe’s most critical raw materials, with the highest supply risk of all materials on the list.

Before we look at them in more detail, it is worth noting that France could re-enter the list of top producing nations in the next few years.

The Couflens Project is located in the Pyrenees region in Southern France, and comprises a 42km2license area.

Owned and operated by ASX listed Apollo Minerals (ASX: AON), the area includes Salau, previously one of the world’s highest-grade historical tungsten mines, which in the 1970s and 80s produced approximately 930,000 tonnes at 1.5% tungsten for around 11,500 tonnes of high grade tungsten concentrate during its 15 years of operation.

If Salau reopened and produced that level of tungsten today, it would not only immediately put France onto the table as a top tungsten producer, but it would propel the nation to the forefront as a producer of some of the world’s highest grade tungsten, offering end users security of supply from its location in the heart of the European Union

Here’s a brief overview of the nations that produced the most of the metal last year.

China produced more tungsten in 2017 than it did in 2016, and was still the world’s largest producer of the metal by an incredibly wide margin. In total, it put out 79,000 MT of tungsten last year, up from 72,000 MT the year before. China has limited the quantity of tungsten-mining and export licenses it awards, and has imposed quotas on concentrate production. The country has also recently increased environmental inspections. Nonetheless, the Asian nation still came out on top.

In addition to being the world’s largest tungsten producer, China is also the world’s top consumer of the metal. China was also the main source of tungsten imported into the US in 2017.

Unlike China, Vietnam experienced another jump in tungsten production in 2017. It put out 7,200 MT of the metal compared to 6,500 MT the previous year. Privately owned Masan Resources runs the Vietnam-based Nui Phao mine, which it says is the largest tungsten-producing mine outside China. It is also one of the lowest-cost producers of tungsten in the world.

Russia’s tungsten production was flat from 2016 to 2017, coming in at 3,100 MT both years. This plateau came in spite of President Vladimir Putin’s order that production resume at the Tyrnyauz tungsten-molybdenum field. Putin would like to see a large-scale mining and processing complex established.

Bolivia tied with the UK for tungsten production in 2017. Despite moves to promote the tungsten industry in the country, Bolivia’s output remained flat at 1,100 MT.

Bolivia’s mining industry is heavily influenced by Comibol, the country’s state-owned mining umbrella company. The company reported a profit of $53.6 million for the 2017 fiscal year.

The UK saw a huge leap in tungsten production in 2017, with output rising to 1,100 MT compared to 736 MT the year before. Wolf Minerals (ASX:WLF, LSE:WLFE) is likely largely responsible for the increase; in the fall of 2015, the company opened the Hemerdon tungsten mine in Devon. As per its 2017 annual report, the company mined 2,266,958 tons of ore and produced 112,270 MTU of tungsten in the year.

According to the BBC, Hemerdon was the first tungsten mine to open in Britain in over 40 years.

Austria produced 950 MT of tungsten in 2017 compared to 954 MT the previous year. Much of that production can be attributed to the Mittersill mine, which is located in Salzburg and hosts the largest tungsten deposit in Europe. The mine is owned by Sandvik (STO:SAND).

Portugal is one of the few countries on this list that saw an increase in tungsten production in 2017. It put out 680 MT of the metal, up from 549 MT the previous year.

The Panasqueira mine is Portugal’s largest tungsten-producing mine. The past-producing Borralha mine, once the second-largest tungsten mine in Portugal, is currently owned by Blackheath Resources (TSXV:BHR). Avrupa Minerals (TSXV:AVU) is another smaller company with a tungsten project in Portugal.

Tungsten is one of the most common conflict minerals in the world, meaning that at least some of it is produced in conflict zones and sold to perpetuate fighting. While Rwanda has promoted itself as a source of conflict-free minerals, concerns remain about tungsten output from the country. Fairphone, a company that promotes “fairer electronics,” is supporting conflict-free tungsten production in Rwanda.

There are a number of companies engaged in the exploration, development and mining of tungsten assets in Spain. Examples include Almonty Industries (TSXV:AII), Ormonde Mining (LSE:ORM), aforementioned Apollo Minerals (ASX:AON) and W Resources (LSE:WRES).

Link to the original article here