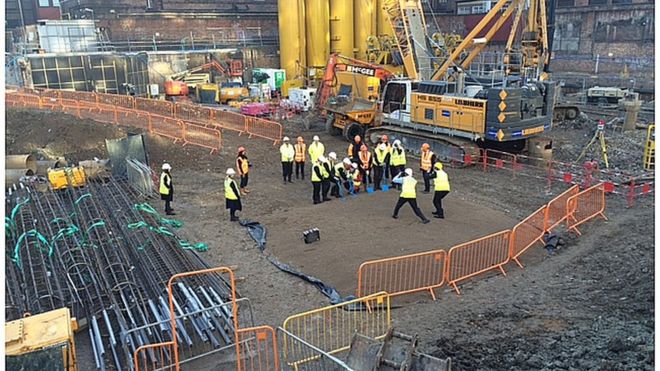 Two new NHS proton beam therapy facilities could offer treatment to 1,500 cancer patients a year when they open in the next few years.

The therapy – which is particularly helpful for children with rare and complex tumours – was highlighted with the case of Ashya King last year.

The five-year old’s parents took him abroad after doctors in the UK did not recommend it for his brain tumour.

Experts say the new centres will be “game-changing”.

The therapy allows precise targeting of certain tumours, increasing the success rates and reducing the risk of damage to surrounding tissues.

But it is not yet available in the UK – apart from one clinic to treat eye conditions.

On Wednesday, a ceremony at University College London Hospital (UCLH) – attended by Health Secretary Jeremy Hunt – marked the start of construction at one of the sites, due to open in 2019.

The other, at the Christie cancer centre in Manchester, will start taking patients in 2018.

Health Service Journal – Only together can we beat cancer

Collaboration between public and private organisations is vital if the NHS is to win the war on cancer, says Sanjeev Pandya, CEO of Advanced Oncotherapy (AVO).

The government’s latest strategy to improve cancer treatment in the UK is welcome, but extra funding alone is not the answer. Greater collaboration is the key to winning the war.

UK cancer survival rates have doubled over the past five decades. For the first time, those developing cancer stand more of a chance of surviving for 10 years or more than they do of getting the disease in the first place.

The problem is compounded by challenges on the road ahead. A growing population of older people, combined with improving patient outcomes for other conditions, mean there is greater demand for NHS oncology resources and palliative care.

Another issue is presented by the future of cancer treatment itself. Advances in medical technology and an increasingly sophisticated understanding of genetics is leading to a greater shift towards personalised medicine. Although highly effective, these treatments escalate per patient costs significantly.

All of these factors conspire to make the NHS’s war on cancer increasingly complex and challenging. They also serve to put a heightened strain on already limited budgetary resources.

In its efforts to attract more international cancer patients to Jacksonville, the University of Florida Health Proton Therapy Institute has held its first-ever symposium in China.

Representatives for the institute had a two-week visit to China where they met with health care providers to talk about proton therapy and the research that proves its advantage in treating certain forms of cancer. The target is adults and children from China.

The UF Health Proton Institute sees a minimum of 100 patients a day, many of them from countries outside the USA that, like China, do not have access to proton beam therapy, which targets cancer cells with pin-point precision.

Advanced Oncotherapy – Men should have open dialogue about screening, treatment for prostate cancer

Men should have open dialogue about screening, treatment for prostate cancer

Dick Guyton is glad he made the decision to continue with prostate cancer screening.

After being diagnosed with early stage disease in May 2013, he took his time and gathered all the options for treatment before deciding on a course of action with his medical team.

We Can Fight Cancer

Cancer is a disease that can affect any part of the body and manifests with symptoms pertaining to the organ / system it affects.

Cancer is a non communicable disease and is responsible for a higher mortality than heart disease in the western world. As the developing nations adopt the western life styles the incidence will be on the rise in developing countries as well. According to International Agency on Research in Cancer (IARC) by 2025, developing countries will harbor 85% of the cancer burden, with only 15% resources to provide medical care to the affected population. In 2014, there were 141 operational proton therapy treatment rooms globally, but by 2019 that number will jump to 330, according to a new MEDraysintell report. In addition, the proton therapy world market is expected to hit $1 billion by 2019.

“There is a growing [amount] of clinical evidence regarding the efficacy of proton therapy, that will progressively be used to treat a broader number of indications,” Paul-Emmanuel Goethals, co-founder of MEDraysintell, told DOTmed News. “In addition, the emergence of lower-cost/compact PT systems, is allowing more centers to be installed.”

The high cost of the systems was the main hurdle that stood in the way of widespread adoption of proton therapy technology. To solve that, almost all of the proton therapy manufacturers offer or are developing compact proton therapy systems.

Shareprophets – How Advanced Oncotherapy Might Rise – Now a £20m Placing of New Shares Is Spoken For.

Disclosure: I own shares in one or more of the stocks mentioned. I wrote this article myself, and it expresses my own opinions. I am not receiving compensation for it (other than from ShareProphets). I have no business relationship with any company whose stock is mentioned in this article.

Hello Share Trimmers. Investors in Advanced Oncotherapy (AVO) are in a peculiar situation. For though our shares are now trading at just a touch over 8p, they could be worth a lot more.

The share price has been held down by a huge placing of extra shares. These shares were lapped up by institutions and existing big shareholders.

We‘re told that this placing was over-subscribed. This suggests to me that the participants could have even paid a bit more for the new stock.

Two or three weeks ago, Advanced was on a massive roll. The stock rose to around 16p a shares from about 3p, just a few months before that.

So shareholders, myself included, were sitting on a huge profit at 16p. We should have cashed in then, as shares started to decay, helped by the company’s announcement that a placing was to take place.

It’s a wonderful thing hindsight, and I kick myself that instead of selling shares at the 15p point, I actually bought more. so my paper profits so far are not that great.

So what happens now? Well, the placing raised a massive £20 million. A large chunk will be used to build its exciting new machines for zapping cancer cells with proton beams.

That extra cash should be applauded by all shareholders as it means the project is now well on course. Perhaps it will stun the medical world, though I understand there is a little competition somewhere out there.

Now it has this money in the bag, Advanced’s future looks tempting to this medical layman. I do know that some very big cheeses in the cancer world are involved in this venture, some of them holding large numbers of shares.

The share is now little more than 8p, but I can now see acceleration, now that the placing is out of the way.

Malcolm Stacey has been writing about shares for more than 20 years. His first book “The Armchair Tycoon” was first published in 1998 but a revised 2014 e-version is now available. To obtain a FREE copy fill in the form HERE

Feedback plc notes that TexRAD, its texture analysis software product will be used by Imaging Endpoints II, LLC, its exclusive partner, for imaging core lab purposes in a forthcoming drug trial in the United States. A study will shortly be commenced of colorectal cancer patients (Stage IIIc) with either Regorafenib or Standard of Care (No Treatment) after adjuvant FOLFOX. The Sponsor is US Oncology Research and the Collaborator is Bayer Healthcare Pharmaceuticals, Inc./Bayer Schering Pharma.

Following the recent announcements of new sales of TexRAD, the Company announces an update on current trading.

Revenue for the current financial year ending May 2015 is expected to be in line with market expectations however due to contractual settlement costs, the product sales mix and the timing of the revenue recognition from the new TexRAD sales, the loss for the year will be higher than the current market expectations.

We continue to seek to broaden the Company’s profile in the medical imaging software sector and are in active discussions with a number of potential customers for research versions of the TexRad product.

We continue to manage our limited working Replica capital resources so as to maximise opportunities with customers and also to continue to develop the Disaster Company’s products.