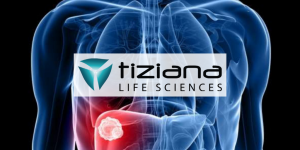 New York and London, February 17, 2020 – Tiziana Life Sciences plc (NASDAQ: TLSA; AIM: TILS) (the “Company” or “Tiziana”), a U.S. and U.K. biotechnology company that focuses on the discovery and development of novel molecules to treat human disease in oncology and immunology, today announces the commencement of an underwritten public offering in the United States of  American Depositary Shares (“ADSs”), representing ordinary shares of nominal value £0.03 each in the capital of the Company (“Ordinary Shares”) on the NASDAQ Global Market.  Each ADS represents five (5) Ordinary Shares.  Tiziana expects to grant the underwriters a 45-day option to purchase additional ADSs offered in the public offering.  There can be no assurance as to whether or when the Offering may be completed, or as to the actual size or terms of the Offering. The price for the Offering has not yet been determined.

Tiziana intends to use the net proceeds from the proposed offering to advance the clinical development of Foralumab, and its other research and development programs, working capital and other general corporate purposes.

ThinkEquity (“ThinkEquity”), a division of Fordham Financial Management, Inc., is acting as the representative of the underwriters in the Offering.

The Offering is being made only by means of a prospectus supplement, which, for the avoidance of doubt, will not constitute a “prospectus” for the purposes of the Prospectus Regulation (as defined below) and has not been reviewed by any competent authority in any Member State (as defined below).

A shelf registration statement on Form F-3 (File No. 333-236013) relating to the ADSs to be issued in the proposed offering was previously filed with the Securities and Exchange Commission (SEC) and was declared effective on February 6, 2020.  This press release shall not constitute an offer to sell or the solicitation of an offer to buy nor shall there be any sale of these securities in any state or jurisdiction in which such offer, solicitation or sale would be unlawful prior to registration or qualification under the securities laws of any such state or jurisdiction.

The person who arranged for the release of this announcement on behalf of the Company was Tiziano Lazzaretti, Chief Financial Officer of Tiziana.

Tiziana Life Sciences is a UK biotechnology company that focuses on the discovery and development of novel molecules to treat human disease in oncology and immunology. We believe Foralumab is the only fully human anti-CD3 mAb in clinical development in the world. This compound has potential application in a wide range of autoimmune and inflammatory diseases, such as NASH, primary biliary cholangitis (PBS), ulcerative colitis, MS, type-1 diabetes (T1D), inflammatory bowel disease (IBD), psoriasis and rheumatoid arthritis, where modulation of a T-cell response is desirable.

For readers in the European Economic Area

For readers in the United Kingdom

This announcement, in so far as it constitutes an invitation or inducement to enter into investment activity (within the meaning of section 21 of the Financial Services and Markets Act 2000, as amended) in connection with the securities which are the subject of the Offering described in this announcement or otherwise, is being directed only at (i) persons who are outside the United Kingdom or (ii) persons who have professional experience in matters relating to investments who fall within Article 19(5) (“Investment professionals”) of the Financial Services and Markets Act 2000 (Financial Promotion) Order 2005, as amended (the “Order”) or (iii) certain high value persons and entities who fall within Article 49(2)(a) to (d) (“High net worth companies, unincorporated associations etc.”) of the Order; or (iv) any other person to whom it may lawfully be communicated (all such persons in (i) to (iv) together being referred to as “relevant persons”). The ADSs offered in the Offering are only available to, and any invitation, offer or agreement to subscribe, purchase or otherwise acquire such ADSs will be engaged in only with relevant persons. Any person who is not a relevant person should not act or rely on this announcement or any of its contents.

To effect this change, ADR holders will receive one (1) additional ADR for every one (1) ADR held as of 21 October 2019, the ADR record date. Existing ADRs will continue to be valid and will not have to be exchanged for new ADRs. In connection with this change, the register held by JPMorgan has been closed for issuances and cancellations from the close of business 21 October 2019 and will reopen on 31 October 2019.