The above update noted that further analyses in respect of target (T1-3) were ongoing, the results of which are now covered below.

– Geophysical inversion of the MLEM data has highlighted a significant ‘jelly-bean’ shaped, geophysical conductor at target area T1-3. This conductor remains open to the east-west and sits within a magnetic trough observed in both the ground and airborne magnetic surveys. No drilling has ever been completed over this target area.

– Historical airborne electromagnetic (“AEM”) data over T1-3 have been further analysed with results showing the MLEM conductor may extend out to 1.6km in an east-west direction, based on coincident airborne/ground survey anomalies.

– The T1-3 conductor has been given a high-priority (A+) ranking by the Company, the same priority attributed to the conductor at T1-6 (where drilling is ongoing) as well as the new conductor identified at T2-3.

– A planned 450m diamond core drillhole, DDH1-3A, has been designed to intersect the T1-3 conductor at approximately 300m downhole depth. The Company has added this hole to the list of holes to be drilled during the ongoing 2022 campaign. Considering the proximity of T1-3 to ongoing drilling at T1-6 (33km southwest), it is possible that T1-3 will be drilled after holes DDH1-6B and DDH1-6C complete, with drilling at T2-3 to follow (see map for relative locations).

“The inventory of high priority A+ ranked drill targets at Molopo are building and we now have the third, T1-3, added to the list.   We plan to drill all three high priority targets during the current drill programme.

Our review has also identified further targets which we believe could become additional priority drill targets subject to additional technical work over those areas.

Each priority conductor identified to date, including T1-6, T1-3 and T2-3, are located proximal to a geological feeder zone but each possess unique size and scale dimensions. By drilling all of these targets, the Project becomes inherently de-risked, and the prospect of a discovery or discoveries increases.

Our attention is principally focused on drilling, with our first drill hole into the T1-6 conductor underway and I look forward to providing further updates at the earliest opportunity.”

– Spectral Geophysics have now completed the 2022 Phase I & II exploration programmes which included four MLEM and four magnetic geophysics surveys over targets T1-6, T1-14 and T2-3 and T1-3. The MLEM and magnetic survey results are assisting the company in refining further drill collar locations for the ongoing 2022 diamond drilling campaign.

– To date, the MLEM survey results have now highlighted:

o  T2-3 (A+): A flat-lying, slightly concave (downward), conductor which remains open in all directions. Drilling is planned at this target.

o  T1-6 (A+): A large, southerly dipping conductor which remains open towards the south, east and west. Drilling is ongoing over this target.

o  T1-3 (A+): A ‘jelly-bean’ shaped conductor which remains open towards the east and west. Drilling is planned at this target.

o  T1-14 (B): A conductor which is near-to the contact zone with known Transvaal carbonaceous mudstones. Due to the estimated depth required to reach this conductor (approx. 650m) and the geological complexity associated with this area, it has been given a lower priority ranking than T2-3, T1-6 and T1-3.

– The Company has also completed an in-depth review of a historical AEM report covering the majority of the Molopo Farms Complex Project. Considering priority areas T1-6, T2-3 and T1-3 were originally identified by the historical AEM survey results, it was decided that further investigation of the targets identified by this report were warranted. Significantly, five of the strong AEM conductors, including T1-2, T1-4, T1-5, T1-10 and T1-11 have been upgraded and are now classified as priority airborne targets by the Company. At T1-11, a 2020/2021 drillhole (KKME1-11) completed by the previous operator was determined to not have adequately targeted this conductor. The Company is in ongoing discussions with its geophysical contractor to determine next steps over these target areas.

Figure 1 – Molopo Farms Complex Project Plan Map: A plan map of the Project area, including the location of various elements mentioned above is outlined in Figure 1 below. 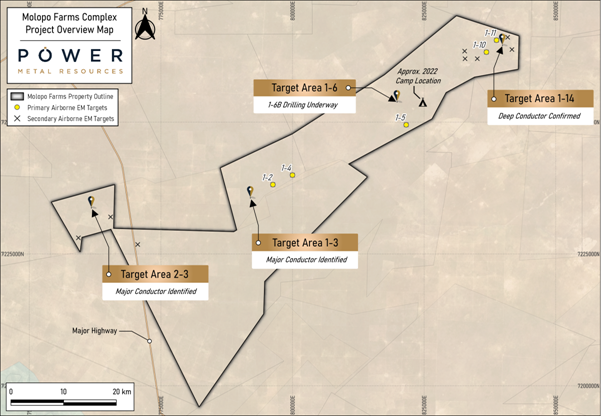 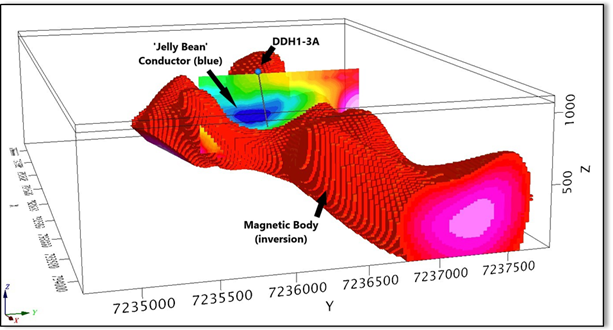 The diagrams and image presented above may also be viewed on the Company’s website through the following link:

Further photographs and videos from the drill programme are and will be available on the Company’s website gallery section, through the following link:

Power Metal currently has a current circa 53% effective economic interest in Molopo, held through a direct project interest and a shareholding in partner Kalahari Key Mineral Exploration (Pty) Ltd (“KKME”).  On 18 May 2022 Power Metal announced a conditional transaction that would see its interest in Molopo Farms increasing to 87.71% (the “Transaction”).  The announcement may be viewed through the following link:

As part of the Transaction, Power Metal will become the Project operator and in advance of completion the Company is working with the team at KKME to maintain momentum with regard to Project exploration.

Work streams are also in process to secure Botswana regulatory approvals enabling the Transaction to complete.

The technical information contained in this disclosure has been read and approved by Mr Nick O’Reilly (MSc, DIC, MIMMM, MAusIMM, FGS), who is a qualified geologist and acts as the Qualified Person under the AIM Rules – Note for Mining and Oil & Gas Companies. Mr O’Reilly is a Principal consultant working for Mining Analyst Consulting Ltd which has been retained by Power Metal Resources PLC to provide technical support.