“The Molopo Farms Complex Project represents a substantial discovery opportunity, both in terms of size and potential, and I am thrilled to report the presence of the targeted nickel sulphides* from the inaugural drillhole into target area T1-3, which is an immense target, the scale of which is clearly demonstrated within the figures below.

At T1-6, the targeted pyroxenite intervals originally intersected by the 2020/2021 drillhole KKME1-6 have successfully been intersected by the two new follow-up drillholes into this target area. Drill core samples from DDH1-6B are currently at the lab undergoing assay testing.

At target area T1-14 we await the detailed core logging results and the downhole geophysics survey data which recently completed.  We will report these findings in due course.

We push on with increased confidence and look forward to reporting further results as well as progress updates surrounding the completion of the drillhole at Target T1-3, as well as the commencement of inaugural drilling at target area T2-3.”

*The presence of nickel sulphides was determined via visual inspection of core and subsequent analysis of identified sulphides utilising a portable X-Ray Fluorescence (“XRF”) spectrometer.

§   The inaugural drillhole (DDH1-3) into target area T1-3A is progressing well with the last reported depth being down to 355.66m. This drillhole is still underway.

§    Initial core review identified visible nickel sulphides at 327m and also within the interval from 348-354m, where an increase in intensity of visible disseminated sulphide mineralisation was identified. XRF readings taken within this interval have confirmed the sulphides to be nickeliferous.

§    It should be noted that the above findings are from the initial core review, and the grade of any nickel or other mineral intersections, can only be accurately determined from assay testing of homogenised samples at an accredited laboratory.

§    Hole T1-3 is continuing to the current planned target depth of approximately 450m. Additional technical details surrounding priority target area T1-3 were released on 30 September 2022 and can be found at the link below:

§   A downhole electromagnetic (“EM”) geophysical survey is now complete with results expected in the coming days.

§   Detailed technical core review is currently underway and the results of this work in conjunction with the results from the downhole geophysical survey, once received, will advise the Company of next steps at this target area.

§   Drillhole DDH1-6B was successfully completed to a depth of 650m with interbedded mafic units, predominantly comprised of pyroxenites and serpentinites intersected throughout the majority of the hole. Pyroxenites were the host rock for nickel sulphide mineralisation found within original drillhole KKME1-6 drilled during the 2020/2021 campaign.

§   Preliminary technical core review from DDH1-6B has been completed and select samples were prepared and dispatched to the accredited assay laboratory in South Africa for analysis.

§   Drillhole DDH1-6B(2) was completed to a depth of 300m which was designed to test for the up-dip (shallower) extension of the targeting pyroxenites identified by drill hole KKME1-6. Hole DDH1-6B(2) successfully intersected (up-dip) pyroxenites units, with detailed core review currently underway.

§   A downhole EM geophysics survey has been completed at target area T1-6, the final results of which will be delivered to the company alongside the geophysical results from target area T1-14 in the near term.

§    Following the completion of DDH1-3, the drilling rig will then move to target area T2-3, where the first ever drillhole into this target is planned. Additional details surrounding target area T2-3 were released on 28 September 2022 and can be found at the link below:

A plan map of the Project area, including the location of various targets mentioned in this announcement is outlined in Figure 1 below. 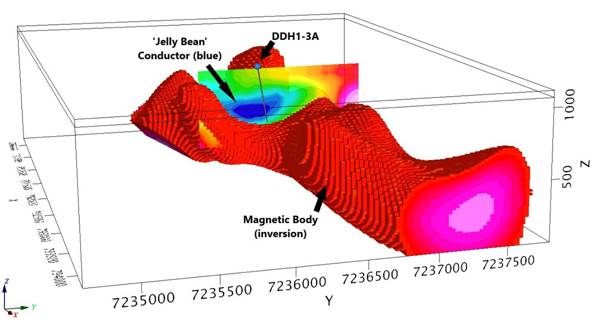 The technical information contained in this disclosure has been read and approved by Mr Nick O’Reilly (MSc, DIC, MIMMM, MAusIMM, FGS), who is a qualified geologist and acts as the Qualified Person under the AIM Rules – Note for Mining and Oil & Gas Companies. Mr O’Reilly is a Principal consultant working for Mining Analyst Consulting Ltd which has been retained by Power Metal Resources PLC to provide technical support.

Power Metal holds a number of priority exploration projects with active exploration underway currently. The status of each project is outlined in the table below:

Exploration work programmes may also be underway within Power Metal investee companies and planned IPO vehicles where Power Metal has a material interest, the findings from which will be released on their respective websites, with simultaneous updates through Power Metal regulatory announcements where required.  These interests are summarised in the table below: