Home » Uncategorized » James Halstead JHD – By Gum, That Were A Real Treat

James Halstead JHD – By Gum, That Were A Real Treat

By Ian Pollard in Uncategorized on 2nd October 2015. 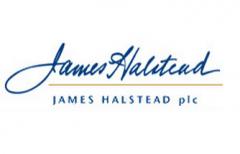 Halstead – what a name to conjure with, redolent of dark northern industrial cities at a time when British manufacturing bestrode the world and Manchester thrived as a centre of manufacturing excellence. None of this fancy re naming nonsense, No “Group” or “International” added  to make it sound grander.  “Halstead” was grand enough on its own, good enough for the founder and good enough for his successors who have just announced yet another record set of figures for the company’s 100th year, with record turnover and record profit before tax, enabling the final dividend to be increased by 12.3%.

But its not the figures which are important. The importance lies in the philosopy at the heart of this sturdy and steady British company, which brokers have been falling over themselves this week to add to their buy lists.

Mark Halstead the present CEO not only thought the unthinkable – he said it and his words should have brought shame to many a  CEO and board of directors.

” it is clear that we are continually faced by great opportunities brilliantly disguised as difficult problems.” Geoffrey Halstead, Chairman

How dare Geoffrey Halstead so succinctly destroy the excuse which trip of the tongues of company directors and  executives in an attempt to save their heads from the effects of their own incompetence and mismanagement -the pin striped  wonders who have nowhere left to turn, except to blame the strength of sterling for “impacting” hundreds of our best known companies.

How often do we  hear such basic wisdom and common sense as was this week displayed by the Halsteads ? There isn’t a university degree course in common sense which is perhaps not surprising, so we shall just have to rely on the Halsteads to try and spread the word throughout British boardrooms.

Halstead manufactures and distributes floor coverings worldwide. It has enjoyed 25 years of continuous sales growth. This year, for the sixth successive year, it has been named Manufacturer of the Year for contract floorcoverings.

Looking for villas and houses for sale in Greece – visit http://www.hiddengreece.net