Don’t Worry, The Flooding Is Unprecedented.

By Ian Pollard in Uncategorized on 28th December 2015. 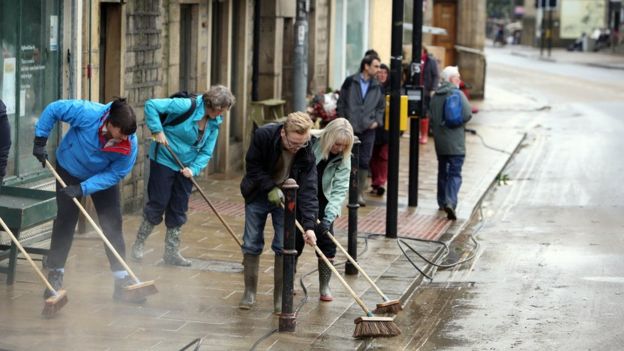 And even better news, Cameron is going to attend a meeting about it all by sitting in on a Cobra session. Cobra you may remember is the governments method of appearing to be taking after the event measures following terrrorist attacks and other national disasters.

The government did not need Cobra, all it had to do was to watch or listen to the weather forecasts well before the biblical deluge began.

Unfortunately the government did not have time to set up a quango and hold lengthy discussions before the rivers in Lancashire and Yorkshire  began to burst their banks. Nature, Mr. Cameron is a bit like that – it waits on no man, especially a laid back Prime Minister who more or less admits that he did not have a clue as to what was about to happen or when it did, what had happened.

The only thing unprecedented about this weekend events was the  lack of response and lack of readiness of the government.

The anger will come when people have completed the task of clearing the mud out of their homes and making them habitable again. Why they will ask were there nowhere near enough sandbags in areas such as York which are liable to regular flooding.

Why they will ask did the Environment Agency stop dredging so many rivers.  Why did the government force a reduction of over 8% in the flood protection budget even in areas of high vulnerability.

The answer to all these questions is that the government does not care – it probably does not even know what  effect its economic policies were having on flood protection work.

Why were local planning authorities allowed to approve new housing development on land which may be liable to flooding.

If ever there was an an opportunity for Jeremy Corbyn to show his metal (if he has any) it is now. The government deserves savaging for its unprecedented failure in the face of global warming but will Corbyn have enough fire in his belly to get out of his armchair and do it ?